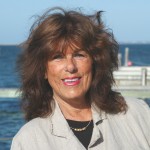 Leslie Linsley has been credited with the revival of découpage in this country through her first book, “Découpage, A New Look At An Old Craft” (Doubleday) and later, “Leslie Linsley’s Découpage” (Bulfinch)  She has since published more than 70 books on crafts and decorating including her popular series of quick and easy “tips” books.  “Leslie Linsley’s Weekend Decorator” (Warner Books) earned her two appearances on the Oprah show. Leslie Linsley is one of this country’s best known authors of home style books including Country Living Aged To Perfection and Country Living Salvage Style (both Hearst Publishing), Her articles appear in numerous magazines including Family Circle where she was the contributing craft editor for 15 years, Woman’s Day, Victoria, Country Living, Redbook, House Beautiful, Elle Decor, Good Housekeeping, Martha Stewart Living, O, and HGTV online.

Leslie has served as a media spokesperson for the following companies, among others: Lowe’s, 3M, Sherwin Williams, Waverly Fabrics, Thompson’s Waterseal, and Hunter Douglas.

Leslie has lived on Nantucket Island for most of her life.

Leslie accepts regular speaking engagements and is a popular speaker at women’s groups throughout the country. Her topics are DIY, salvage style, making a living through your creativity. She is represented by: