By LeslieNovember 1, 2015Leslie's blog from the Nantucket Inquirer & Mirror, Uncategorized 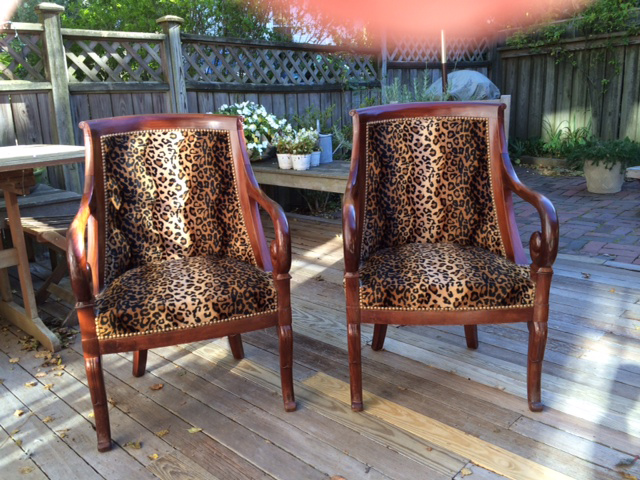 Last week I told you about the neat leopard skin chairs I bid on at Raphael’s auction. No bargain comes without a price tag. Sometimes a dresser has one drawer permanently stuck shut. Sometimes chair leg is slightly wobbly. Those chairs I bought are sensational. But they smell musty. No problem, I thought. I’ll put them in the sun. I put them out in the morning and took them in at night for a week. They are very heavy which makes me love them all the more and even overlook the fact that they are a tad low. The smell is fading but I first gave them a spray of Fabreze which only gave them a perfumy smell – more odious than the musty smell. The Internet suggested vinegar. I did not like this idea. Now it is ten days and the odor is fading, and my “out in the sun,” routine goes on.

But it’s fall and this is what I do. Rearrange. I sent a picture to my decorator friend in California. I knew she’d love them. She has a lot of animal skins on things. She ripped apart my “arrangement” which I explained was a “work in progress”. I moved the chairs to another spot, put another table between them and a lamp with a black shade as she suggested. It’s getting there.

Good friends, both in the world of design, came to dinner. I asked their opinion. They love the chairs, but more suggestions. So while you are seeing the first arrangement, here, there will be more. 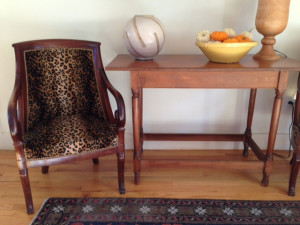 It’s almost Halloween and the only time I use my orange and yellow plates. Each orange plate is rimmed with yellow polka dots and yellow plates with orange. A Key West potter friend made them. I used those baby pumpkins I wrote about last week to create a mini tablescape on my table. Again I cut little holes in top and filled each with herbs. .. Tiny votives and a string of mini lights add sparkle. As you can see if you’ve followed my blogs, I like to overdo a good thing. Round orange placemats with alternating, green, orange and yellow napkins go with this theme.. Use produce to be creative with table settings.. Baby Brussels sprouts are a favorite. Fill a large glass vase with the sprouts, add a small amount of water and insert sprigs of lavender or any green herbs like mint which is still growing like crazy if you planted it. 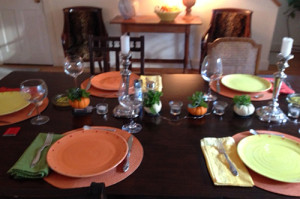 Fall is a good time for small projects around the house. We finally got around to putting up a bannister along a wall going down just three steps from my dining room to my entryway. It has taken over 6 months to do this project, but it was worth the wait. At first we wanted a piece of driftwood as a handrail but couldn’t find the right piece. Whatever it was made of the final item had to look like a piece of sculpture, but function beautifully as well. When in Key West I approached an artist friend who makes 6-8 foot sculptures from large palm fronds.

Together we found a small palm for the handrail. She then rolled it tightly, cut it to size for my wall and over a period of many weeks added layers of resin to the drying palm frond. Over time it developed a luster that also brought out the natural grain of the leaf. It is now as hard as a rock, smooth as silk, curved in a most sensuous way and feels good when you slide your hand down it. We had brackets made and stained to fit the ends and match the color and Jon was able to install it after many trips to Marine Home Center for the proper nuts and bolts. Now, we no longer have to worry about someone falling down these three little steps, but best of all our functional item is both practical and a piece of artwork on the wall.. I know most people would not go to such extremes, but it’s worth taking the time to solve problems in unconventional ways if adding beauty to your home is a goal.. It’s fall. It’s getting cooler. It’s time to come inside. This is a great time to create new living arrangements, or maybe just solve one nagging problem – like putting up a bannister.