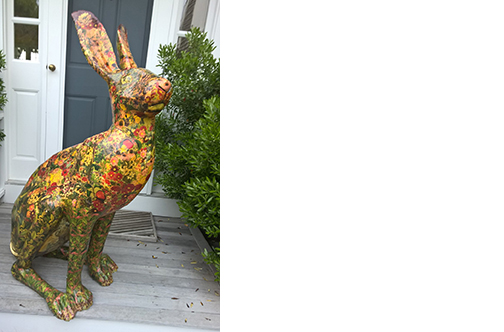 I’ve always been attracted to Outsider Art; self taught art by undiscovered raw talent. It is naive, often made by prisoners, the insane, poor, indigent, disables, black, reclusive, and by people living marginally, on the fringe of society. It has become a term to describe “different” from the expected, mainstream and acceptable. An example might be two small drawings hanging in the Whitney Museum. It is by a self taught artist named James Castle and they were drawn with the artist’s mix of soot and saliva as he had no money for, nor access to, traditional art supplies. Usually outsider art is surprising, leaving us with questions, wanting to know more about the circumstances under which the artist lives and creates, or did live, if no longer alive. We are more generous about acceptance when we learn that the art was born out of raw talent produced under dire circumstances. It tells us how compelling it was for the artist to express him or herself. And this fact alone makes us want to embrace the art. Further it is affordable and therefore accessible to everyday appreciators with limited funds. At least it always was
But lately I’m distressed to find “outside” coming “inside” so to speak.
Major New York City galleries are embracing these artists, expensively and lavishly framing and showcasing their art in upscale professional galleries in all large cities, notably N.Y. and Paris. Last year I made a special trip to New York City to see a gallery show in Chelsea and was disappointed, not with the art so much as the fact that it was now selling for big bucks and not at all accessible to anyone but serious collectors. I suppose this is a good sign for the artists, but then again, I’m not so sure as they are now competing with established artists. Does this mean they are no longer “on the fringe”? And can it still be called “outsider art”?

Something to ponder as our island becomes more and more gentrified with most events out of reach of the people who make up the year ‘round population, or what we might consider the same people who might buy outsider art. And, in some cases, the people who established the event or venue (like the artists) for which they can no longer attend.
On that note, I just received a phone call from a summer homeowner who owns a piece of art that could be considered “outsider” although I’m not totally sure of its origin. However, it is a good example of funky folk art, in fact decoupage, which was the reason for the call. It seems this gentleman and his wife were at a charity event in England, bid and won a five foot tall decoupage hare. It tickled them to bring it home to Nantucket. The design, typical of British decoupage, along with Victorian valentines, was created from flower seed packets, forming a sort of collage effect covering the entire hare.

The reason for his call was that the pieces of paper were coming loose from the surface and the finish had lost some of its original luster. He wanted to know what to do. It turned out to be a simple problem for me and I told him to glue the edges back with good old Elmer’s Glue-All and to protect it from further destruction by covering the whole thing with polyurethane. Just in case you find yourself in this fix, although I doubt everyone, or ANYONE for that matter owns a decoupage hare.. But this item was so unique (he sent a picture) that I thought it worth sharing. Perhaps it will inspire someone out there to do something similar, if not with a hare, perhaps another sort of statue, even a planter or urn or something dramatic. Seed packets provide a good source for decoupage and they’re easy and cheap to come by. Plus, you get to use the seeds!

And just a flash FYI as it only lasts a day: If anyone is from Greenwich, CT. the Greenwich Times featured an article on me and my new book, “Nantucket Cottages & Gardens” on the front page of the real estate section of the June 27 issue. Greenwich and Nantucket summer resident and decorator, Jean Doyen de Montellieu graciously lent them a quote or two about me as his cottage is featured in the book and he’s my next door neighbor!! See his cottage below. 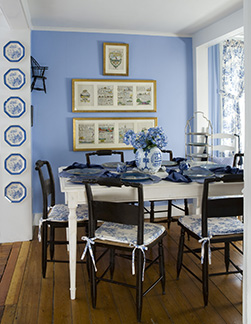 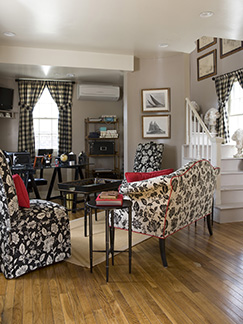