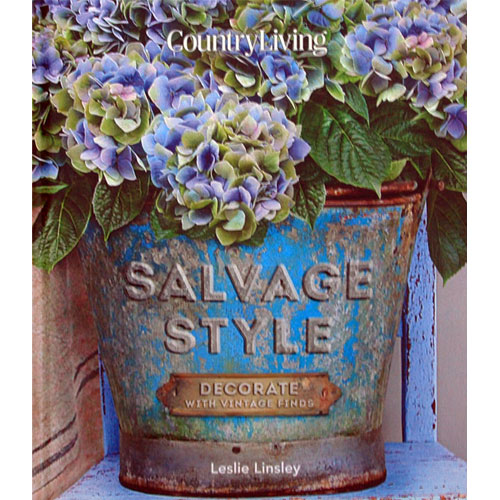 My new book, “Salvage Style” has just been released by Sterling Publishing.. The subject is decorating with recycled and reclaimed materials. For the second time I partnered with Country Living Magazine. The first book with Country Living was Aged To Perfect. Salvage Style is filled with photographs and interviews with homeowners all over the country who are passionate about recycling and repurposing material and objects to infuse their homes with character. Like all my books, Salvage Style is user friendly with the emphasis on inspiration through the photographs and stories the homeowners share about their passion and how they decorated their homes. There are how-to sidebars as well as my favorite resources revealed.

What is salvage style? Before it became a style of remodeling or decorating a home, recycling materials like barn wood and architectural pieces from dismantled early homes and industrial buildings was thought to be a sign of frugality. But over the years the use of an old barn door in a modern home, installing old beams on a modern kitchen ceiling, mounting industrial wheels to a piece of weathered wood to create an interesting coffee table, ala Restoration Hardware, became chic. Homeowners and decorators began to recognize these one-of-a-kind touches for what they were – a way to infuse a home with character. Deep-rooted respect for the past is often a motivating factor for salvage users.

Interior designers have always decorated with items made from repurposed material. Reclaiming local, honest materials that tell a story of their heritage have become very appealing. Collectible items from specific eras represent an easy way to infuse a home, no matter when it was built, or in what style, with a unique quality. For example, one homeowner had a collection of early cooking implements that she displayed on shelves made from recycled, weathered wood in a contemporary kitchen. It was an interesting way to warm up the room. Worn items are comforting to live with especially when they are remnants of Nantucket’s early days.

My first Nantucket home was a four-room cottage. I had no money for improvements or decorating and relied on ingenuity by using recycled material and yard sale finds. It was at a time when the Landfill truly was the dump and one could practically build a house from discarded building material. I created a backyard patio from bricks that came from a dismantled fireplace in an early 1800 house on my street. Over the years I’ve created brick walkways, two driveways and another patio, all from discarded bricks that didn’t cost me a cent. Builders who knew of my many bricklaying projects began tossing used bricks into my yard as they passed by. It became a community project.

I’ve been in many Nantucket homes where the homeowner will proudly show off something that was salvaged. For example, when Terry Pommet and I were photographing in Ginny Kinney’s house for my book, “Nantucket Cottages & Gardens”, one of the items I loved the most was a funky, worn wooden door leading to her basement. While the house was newly built, Ginny was smart enough to incorporate this and other repurposed items into the new construction. They have both visual and historic value beyond their original purpose. That door, in fact, is more interesting in its new surroundings than it probably was in the original house from which it was salvaged.

Old doorknobs, hinges, shutters, add outstanding details in a modern home. Enlightened homeowners who have renovated old houses on Nantucket often keep the original doors and fireplaces or mantels that speak of the origin of the house. Island designers like Elisa Allen and the team at Nantucket Looms and renovators like Penn Austen are doing a great job to meld modern design with early Nantucket architectural details.

I’ve always been attracted to hardware stores and junkyards. My first house was filled with things I found at Stamford Housewrecking in Connecticut . My experience in the BHV mega hardware store in Paris years ago is one I remember vividly. I have a dozen beautifully made wheels that I bought just because I thought the wood was so interesting. I still don’t know what to do with them, but live with the belief that a project will reveal itself. The porcelain oval doorknobs I bought at a flea market in Florence, Italy open a pair of French doors in my office and they remind me of that trip every day. I often wonder about the house they came from.

If you’re building a new house or restoring an early Nantucket home, you should know about Restoration Resources in Boston. This architectural salvage emporium is the mecca of all places to find a vast array of architectural antiques and decorative salvage for home restoration.
For over twenty years it has been THE “go to” place for the decorating trade. This 7,000 square foot warehouse sells old house parts from historical sites, period homes, Beacon Hill brownstones. The owner, Bill Raymer has been rescuing and recycling these treasures that are coveted for their beauty, history and scarceness. This is a decorator’s, renovator’s and restorer’s dream find and worth a day trip for anyone with a home on Nantucket.