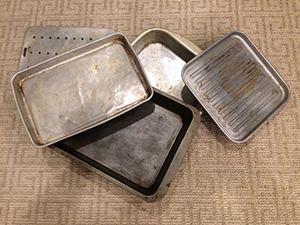 My New Year’s resolution is to de-clutter my house, a little at a time. The idea was that with just a few minutes devotion to this task, by year’s end my house would be an organizational thing of beauty. All possessions and things that had lived past their prime will have been replaced. Perhaps many of you want to start the year with a clean slate that involves getting rid of stuff. I find no joy in this endeavor, even though current magazines tell us otherwise.

Just for a small example of what appeared to be a looming problem: I have dented and rusty broiler pans that should be replaced, but they’re stacked neatly so I forget that I should buy new ones. This is not what the experts call de-cluttering. This is called fooling yourself. I don’t tackle this problem because it isn’t major in the scheme of things. But it’s annoying from time to time like when I need to broil something. So why don’t I get to it? Because there are more fun things to do with time off than go shopping for a new broiler pan. Do I buy a new one first and then throw the old one away or vice versa? And what if I throw it away and don’t get another before I want to broil something? And if it’s so hard to solve this tiny problem how can I tackle an entire house that has not only an attic, but a full basement? I don’t know where to start. And the bigger than life problem is this: Is it really so important?

But then I’m standing in line at the supermarket and the magazine headlines scream out in bold type, “Get Organized”, “Ten Ways To De-Cutter”, “The Joy Of Tidying Up”. Am I missing something. Is de-cluttering really so joyful? I must admit, my house is usually in order. It looks good and I’m pretty organized. But I have a nagging feeling there’s too much stuff. I think if I deal with it life might be less stressful because I’ll stop obsessing about it,. But how will I know if I don’t de-clutter?

While we are a country of consumers, it seems we are a society that sees consumption as a monumental problem, so why not give it a shot, I thought. If truth be told, there’s absolutely nothing I’d rather not do than make decisions about throwing things away. I’ve tried. For about ten minutes. It’s not all that much fun. I do admit however, it has some appeal. as the results can be satisfying. Not like sitting down with a bowl of Ben & Jerry’s Coffee Toffee Crunch ice cream, but much more slimming in the scheme of things.

I’ve tried many times to de-clutter all at once. It doesn’t work. For example, I decide to weed out my book shelves. I take all the books off the shelves and before I know it I’ve immersing myself in reading bits and pieces from each one to see what I loved about it and to decide if it’s worth keeping. Somewhere in the process I lose sight of the original idea to weed out and hate that I wasted time with little results. I always end up putting everything back, exactly as it was. I empty a kitchen drawer only to rid myself of a rusty melon baller (like, when did I ever think I’d scoop melon balls?)

So, with a New Year in front of us, I’ve decided to devote just a minute or two each day of the year to ridding myself of the things that no longer give me pleasure or help my life in some way. If all goes as planned, by this time next year I will be living in an organized, streamlined, very efficient home. My life’s goal will have been realized at last. I will resolve to put my home on a diet and lose “things” rather than pounds. Whenever I complain to Jon that I can’t seem to reach a certain goal I’ve set for myself, his stock answer is, “Well, set your sights lower.” And this attitude has finally sunk in.

It’s been a week. I did tidy up the junk drawer in the kitchen and took all chipped glasses and chinaware to the dump. I tackled my office closet and got rid of thirty years’ worth of duplicate tear sheets from all the magazines in which my work appeared. My children thanked me!! They are thinking ahead (many years I hope). As I put away Christmas decorations I weeded out the strands of lights that no longer work and carefully coiled the good ones. I put them in clear baggies marked with its contents. I neatly folded reusable wrapping paper and made gift tags out of the Christmas cards I received and put the boxes back in the attic And then I felt so good I gave myself a pass until spring. Here’s hoping you do better with all your New Year’s Resolutions. Happy New Year.