By LeslieMarch 24, 2015Leslie's blog from the Nantucket Inquirer & Mirror

If you’ve ever read anything about Key West you know about the chickens! Yes they have a run of the place. One gets used to them crossing the road! They run around Blue Heaven, a touristy restaurant that thinks this is a cute public relations idea! It is not!!! But I like the chickens. Just not running under my feet, pecking away at crumbs dropped under the table on the restaurant patio. I do not go there. Once was enough. But chickens are part of the scenery here and their image is on EVERYTHING! There are paintings in galleries, statues of chickens for the garden, chickens on t-shirts and even chickens on a sponge! There was a chicken store with real chickens roaming about. They sold all kinds of tourist stuff with chicken images. It’s kind of like “when in Nantucket you buy Nantucket Reds” even if you never ever wear them once you are back in Omaha. I actually bought a cap one year with embroidered, “chicken girl” on the front.

After one is in Key West for a fair amount of time it’s easy to embrace the image. I find myself attracted to dishtowels with chickens on the front. I bought a bunch of dishrag/sponges, the kind that are flat and feel like cardboard until you soak them and they expand. They have a stylized chicken drawing on the front. I give them to friends when I go to dinner.

I have a favorite store here called Cottage Garden. It is filled with great “gotta have, DO NOT NEED” items. They have a metal sculpture of a chicken. It is yellow and aged, even though it isn’t old. It is rusted as if it had aged naturally. It’s on a stand. I see it in my Nantucket garden. It has been in the store all winter. They must have lots of them. I have resisted buying it because I am almost sure that when I get it home it will look ridiculous in my Nantucket garden. Non-the-less, I HAVE TO HAVE IT! 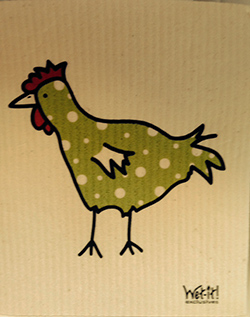 The other day I was walking down my street into town. There nestled in the brown fallen leaves at the base of a gnarled tree was a chicken surrounded by a dozen baby chicks. You could barely see them as they blended in with the ground cover right at the edge of the sidewalk. There you go! Twelve new chickens for one measly chicken catcher! How could he possibly keep up.

Herons walk freely down the middle of the road right along with the chickens. Iguanas slither along. All the wildlife seem to coexist with the humans putting a bit of a humorous spin on life. 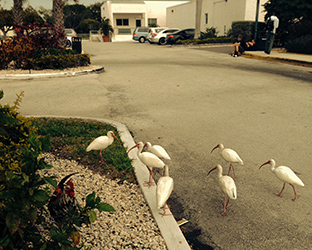 Can you imagine dozens of chickens, egrets, herons and slithering green things that look positively prehistoric making their way down our cobblestoned Main Street? Best of all, people here, both islanders and visitors seem to take it all in stride. Tiny lizards skitter over the tiles on my living room floor. If this were Nantucket I’d be freaking out. If I tripped over a family of chickens on my front path in Nantucket I’d be slightly unhinged. But then, because they outnumber the people, in some strange way, the chickens and other wildlife make life less serious. It’s hard to get worked up about little bothersome things when the background “music” is constant cackling and crowing. After all, they’re doing all the complaining about US mucking up THEIR space.