We all have things that make us nostalgic. When, for example I find a old box filled with buttons at a yard sale it makes me want them. 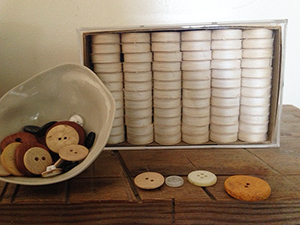 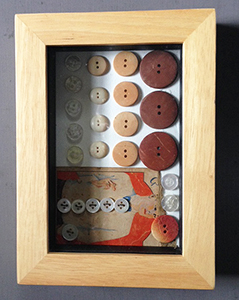 Since sewing is a lost art, most of us are reminded of a grandmother’s sewing box of implements when we see these things. I used to sew, not well, but well enough to turn an idea in my head into a real object for use. Mind you, it was only on the order of something like stitching one square of fabric to another, nothing wearable. Once, many years ago I took a sewing class at the community school. Of all the things I could have picked as a first project, the red satin evening coat was probably a very poor choice. First of all, it was impossible to make for a beginner. And second of all, where in the world did I think I was going to wear such an elegant garment? Perhaps I was living out some fantasy from another life.

I don’t remember if I ever finished it, but I know to this day I can not claim sewing as something I’m proud of although I do own two sewing machines.
They gather dust in a closet. Somehow I never got the hang of how that bobbin works. And forget about instructions. I never trust them even when they aren’t written in Chinese. But to this day I love sewing accouterments: buttons on cards and in baby jars a staple of every yard sale and junk yard store, old fashioned scissors called “snippers” from the 1930’s, tape measures made of silk and encased in metal, wood or celluloid from the 1920’s, pin cushions, needle packs with ornate labels with fancy fonts, patterns on yellow tissue thin paper and wooden spools of silk thread.
Many years ago I used to visit a little shop in New York City, Tender Buttons.
It’s still there at 62nd Street between Third and Lex. If you’re a sewer, this shop will set your heart aflutter. I like things from the past that were for practical uses. They may be old-fashioned now, but they were found in every household before mass produced clothing took off in the 1940s. If you’re looking for a collection with a bit of nostalgia, that doesn’t cost much but has appeal and is easy to find, this might be it.

Somewhere on my way to being a collector of sorts, I found an old wooden sewing box with a roll-up front closure. Inside were small partitions or open cubbies for holding thread. When the housing development of Nashaquiset was being built there was a farmhouse on the property. Today it houses the main office and a couple of apartments. But at the time that the property was being sold, the owners held a yard sale. It was here that I bought a basket filled with wooden spools of silk thread. The colors, all brilliant shades of the colors of the rainbow are simply beautiful. They make up the contents of the wooden sewing box and sit in a niche I had built into a wall specifically to hold this box of spools. 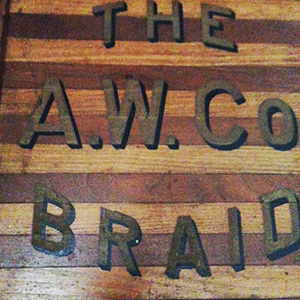 Later I found a bunch of bobbins wound with white thread and had a Lucite box made to perfectly hold them. They make a spare, symmetrical little display. It’s easy to assemble a collage of similar items from a specific era and frame them in a shadow box for hanging. It’s fun to create little vignettes for the bathroom or a hallway area.

Another practical item I like is an old-fashioned silver toast rack that is very English. I started finding them at Covent Garden in London years ago and now have about a dozen which is plenty for practical uses like holding letters and notes to myself or folded pages cut from a magazine. Once you have too many of something it starts to become a burden, but a few of one thing is a nice collection – at least this is my rational for responding to a desire for something but not risking becoming obsessed. We all know the opposite of unburdening or decluttiering is accumulation. I don’t want to be a collector. I really want to be a person who lives minimally and only keeps what is necessary to have interesting rooms. But I’m human. I live in the world of things, beautiful things, things that speak to me, things I’ve inherited, things I’ve created. It’s a difficult balance.